16 Delicious Cocktails That Show Off Drambuie

These cocktails all highlight Drambuie, and are perfect for anyone who knows and loves the delicious Scotch-based liqueur or those just being introduced! They’re easy to make, approachable, and will impress cocktail amateurs and aficionados alike.

Drambuie is a 40% ABV liqueur made with Scotch whisky, heather honey, spices like clove & ginger root, and herbs. It’s perhaps best known as being the star ingredient in the Rusty Nail cocktail, where it’s paired with Scotch.

Only three people know the actual recipe for Drambuie, and they guard it like I guard the last flat in a chicken wing basket. So we’ll never know the exact ingredients, but we don’t need to in order to enjoy it!

For a bit of history: Prince Charles Edward Stewart allegedly gave his secret recipe for Drambuie to Captain John MacKinnon of Clan MacKinnon in 1746 after being granted sanctuary on Scotland’s Isle of Skye. Whether or not this is true or a tall tale created for marketing purposes, Drambuie has undoubtedly been around for a VERY long time.

Even though the recipe first appeared in the 1700s, it wasn’t commercially produced until 1910, when it passed hands to the MacKinnon family (coincidentally, no relation to the MacKinnon clan). They owned the brand for 100 years until they sold it to William Grant & Sons Scotch distillery in 2014.

Today Drambuie is the most popular Scotch-based liqueur on the market and it’s won several renowned awards. Most recently, it won double gold at the International Spirits Challenge in 2020 and a gold medal at the International Wine & Spirit Competition in 2021. As far as price point, a 750ml bottle of Drambuie costs between $33-$37, so it’s not too expensive as far as nice liqueurs go!

Drambuie pours a clear gold and immediately hits you with aromas of warm honey, malty whisky, anise, and vanilla. On the palate, Drambuie is a sweet and complex explosion of flavor with a velvety, round texture. You’ll predominately get notes of rich honey, clove, vanilla, saffron, and orange zest with a whisky bite at the finish.

So even if you aren’t a fan of Scotch, that shouldn’t scare you away from Drambuie since it tastes completely different!

What Can I Mix With Drambuie?

Drambuie is great on its own or on the rocks, but it’s also a super versatile cocktail ingredient! Below are some of the more popular mixers/flavors to pair with Drambuie, but it’s by no means an exhaustive list.

I wanted to start off with the most famous Drambuie cocktail: the Rusty Nail! This classic prohibition-era drink is usually made with 2 parts Scotch to 1 part Drambuie, but this recipe uses a 3 to 1 ratio instead. To me, this is the best way to make a Rusty Nail so it's not overly sweet. I also like they recommend Dewar's 12 Year Old Scotch Whisky, since its smooth maltiness will complement the honey sweet Drambuie wonderfully.

Here's a variation on a Rusty Nail that's a pretty big departure from the original recipe, but just as tasty! For this version, you use mezcal instead of Scotch and add in orange bitters and muddled jalapeño. The mezcal is a fantastic and creative substitution for the Scotch since it adds more smokiness to the drink, and the jalapeño's spice balances out the sweetness of the Drambuie.

When I first saw the ingredients for this cocktail, I KNEW I immediately had to make it. It calls for Drambuie, pineapple juice, Fernet Branca, lime juice, and Angostura bitters. So it's a super unique take on a tropical tiki drink that uses Drambuie in place of rum, with a complex flavor that's perfectly balanced between sweet, sour, and bitter!

Not everyone would think to put Drambuie in a margarita, but trust me -- it works SO well since Drambuie goes great with citrusy, sour ingredients. Aside from Drambuie, ingredients are tequila, orange liqueur, and lime juice. Such a simple and fun twist on a classic marg that would definitely impress your cocktail-savvy friends!

Nothing beats a hot toddy when it's chilly outside, and this one is as easy as it is tasty! The three ingredients are Drambuie, apple cider, and a squeeze of lemon. Garnish with a cinnamon stick for a cocktail that tastes like fall in a glass!

Sours are my go-to cocktail and I love trying out new recipes, so I was super excited when I found this one and it did NOT disappoint! It uses Irish whiskey, Drambuie, lemon juice, egg white, and five-spice syrup. The five-spice syrup is definitely an extra step, but it's so worth it for the complexity it adds and how well it plays with the Drambuie!

Everyone loves a good espresso martini, and this one is totally unexpected and delish. It's also really easy to make -- you just need Drambuie, Scotch whisky, and espresso. Shake it all up in a cocktail shaker with ice for a fun and nuanced pick-me-up.

This is another cocktail that leverages the beautiful combo that is coffee and Drambuie! It uses the same ingredients as the above espresso martini, but adds in crème de cacao and cream. So it'll be more decadent and smooth with strong notes of chocolate and honey. YUM. Show Me The Monkey

Monkey Shoulder is a blended malt whisky that pairs great with Drambuie! The other ingredients are just apple juice and mint leaves. The mint brings out the more herbal and minty flavors of the Drambuie, while the Monkey Shoulder gives it a nice bite that rounds it all out.

Here's a final variation on a Rusty Nail that's probably my favorite I've tried so far! It keeps the original base of Scotch and Drambuie, and adds Heering cherry liqueur to the mix to make the drink more spicy, fruity, and bitter-sweet.

Moscow Mules are so easy and always please a crowd, and this one is no exception! All you need is Drambuie, Scotch whisky, and ginger beer. Ginger beer and Drambuie are a match made in flavor heaven, and this mule will be spicy, complex, and refreshing.

This cocktail comes from Drambuie's own website, so you know it's good! It's a refreshing combination of Drambuie, grapefruit juice, wheat beer, and mint leaves. So it's basically an elevated shandy that's as fun to say as it is to drink!

This cocktail from Hendrick's Gin was partially inspired by The Last Word cocktail, and it's perfect for the summer time! It's made with Drambuie, gin, blanc vermouth, and lemon juice. Garnish with a cucumber and mint for a garden party in a glass!

Typically a Collins is made with gin, lemon, sugar, and soda water. This riff on the classic cocktail replaces gin with Drambuie and omits any sugar since Drambuie adds the perfect amount of sweetness. Perfect for summertime sipping or whenever you're craving a light, refreshing cocktail! To finish off our list, we have a decadent but super well-balanced cocktail from Remy Martin. It's similar to a hot buttered rum, and it's made with cognac, Drambuie, butter, brown sugar, and cream. It's beyond delicious and such a comforting drink when it's cold outside!

I hope these cocktails gave you some fun ideas on how to use up your next bottle of Drambuie! It’s cold out right now, so I’m personally super excited to whip up a Brandy Snap.

And if you have a favorite Drambuie cocktail that I need to try, please let me know in the comment section below 🙂 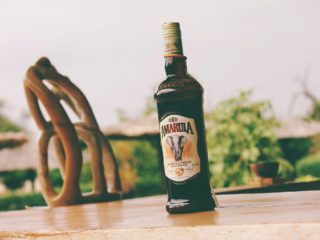