From strong dessert shots to shots that taste like mini versions of your favorite cocktails, these 2-ingredient vodka shots are perfect for any type of party and won’t break the bank by requiring a ton of different ingredients!

Vodka is the best liquor to use for shots and shooters since it has a fairly neutral taste and works with a really wide range of different mixers and flavors.

So whether you’re making a shot or shooter, vodka is a great choice to use as your base!

It’s good to note that shots and shooters are slightly different.

Shots are usually served in 1 to 1.5 ounce portions and made up of 100% alcohol.

Some examples include the B-52 (coffee liqueur, Irish cream, and Grand Marnier) or the Stone Cold Stinger (Jägermeister, Goldschlager, and Rumple Minze).

Shooters on the other hand tend to be served in 2 to 3 ounce portions and are a combination of alcohol and non-alcoholic mixers.

So they’re essentially like mini mixed drinks. A few you might have heard of are the Alabama Slammer (Amaretto, orange juice, gin, and Southern Comfort) and the Tootsie Roll (coffee liqueur and orange juice).

Shots and shooters are both featured on this list for the sake of variety.

There are three types of vodka you can use in shots: plain, flavored, and infused.

By far the most popular type of vodka and what we use in most mixed drinks and shots. Examples include Tito’s, Absolut, and really any other vodka that isn’t flavored or infused.

Plain vodka is perfect for shots because it’s really only made up of ethanol and water, so it has a neutral taste that’s unoffensive on its own and blends in with whatever mixer you’re using.

Flavored vodka is exactly what it sounds like — vodka with flavor added. Flavors can range from bizarre (like tobacco) to the expected (like strawberry), and they can be fun to use in shots since you can come up with some pretty creative combinations.

They’re also great for 2-ingredient shots because they can stand in for flavors that would have otherwise required an extra juice or other ingredient.

Infused vodka is vodka that’s flavored with real ingredients, like herbs and fruits, as opposed to artificial flavorings.

Usually, infused vodkas are made at home as opposed to bought at the store since there isn’t a huge selection on the market. They’re considered to be more sophisticated than flavored vodka and are made by steeping the ingredient in vodka for a prolonged period of time.

Infused vodka can be great for shots if you want them to have unique flavors you couldn’t get from store-bought vodka (i.e. Candy Corn, Jolly Rancher, etc).

These shot recipes feature every type of vodka, but plain vodka is the most commonly used.

Best Type of Vodka for Shots

Ultimately, any vodka will mix in fine with jello, so the best vodka for jello shots comes down to your price point, preference, and the recipe.

That said, as far as brands go, I have a whole post on the best vodkas to use for jello shots that can help you decide what vodka will work best for your purposes 🙂

Quick disclaimer: I’m not counting pantry staples like citrus, sugar, or other spices as ingredients since you likely already have them on hand.

So with all of this said, let’s check out these easy but fabulous 2-ingredient vodka shots!

To start us off, we have one of the most beloved vodka shots of all time: the Lemon Drop.

Although technically a shooter, it packs a big punch since the only ingredient other than vodka is two teaspoons of lemon juice. You can also add some sugar around the rim to give it a little sweetness! 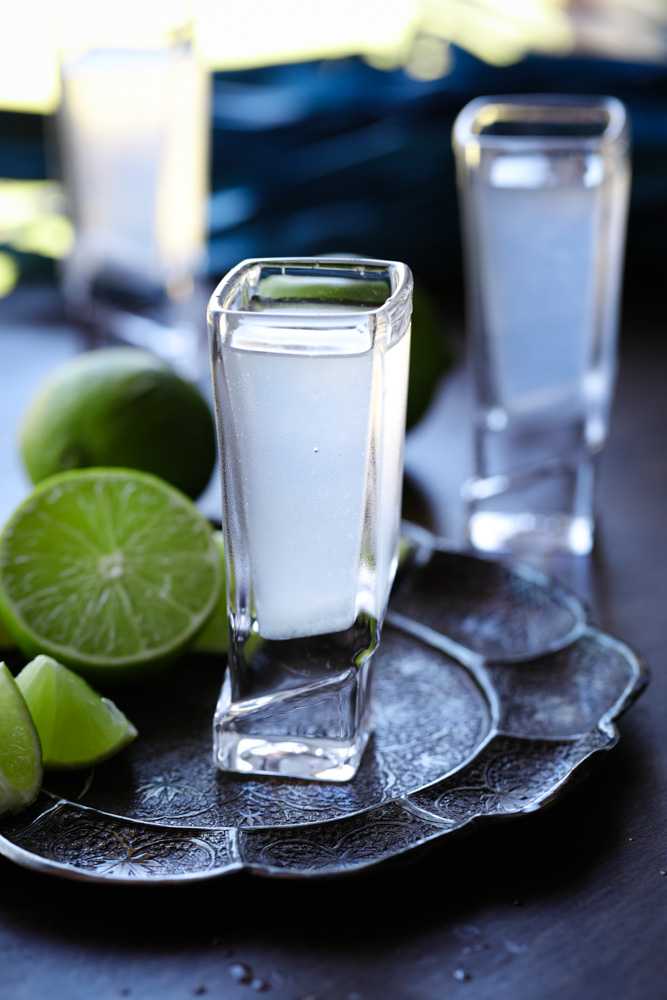 Another classic vodka shot that your friends have likely talked you into taking once or twice!

Vodka, triple sec, and a squirt of lime are all you need to make this simple but tasty shot.

This shot is a miniature version of a dirty martini. If you're not familiar with the cocktail, it's made with vodka and olive brine.

This recipe makes four shots, and you use 4oz of vodka to 1 1/2oz of olive brine with a splash of water. Garnish with an olive and you have a sophisticated, boozy shot that almost everyone will love! 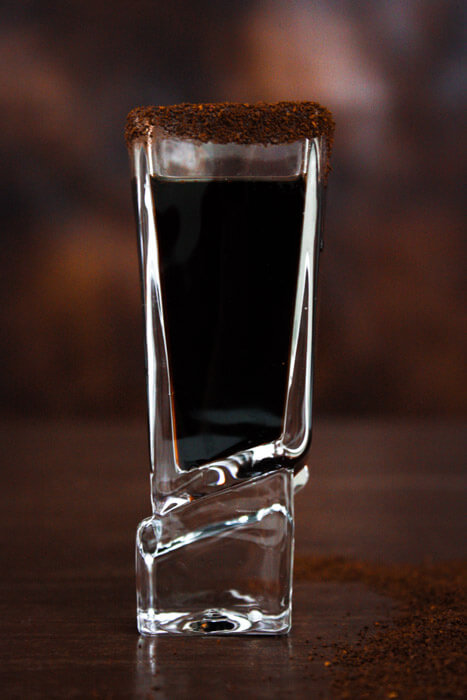 We've all heard of the White Russian cocktail, which is made with vodka, coffee liqueur, and cream, but have you ever tried a Black Russian?

If not, there's no time like the present! This shot is just a White Russian but without the cream, so all you need is Vodka and Kahlua. Who doesn't love a good jello shot!? If you haven't made jello shots before, it's actually beyond simple.

This recipe uses Mango Pineapple Vodka along with pineapple jello. You just make the jello following the package instructions, throw in the vodka, and then pour the mixture into plastic shot glasses. Then put it in the refrigerator for a few hours and you're done.

Also, if you love jello shots, check out these 24 vodka jello shot recipes for any occasion! 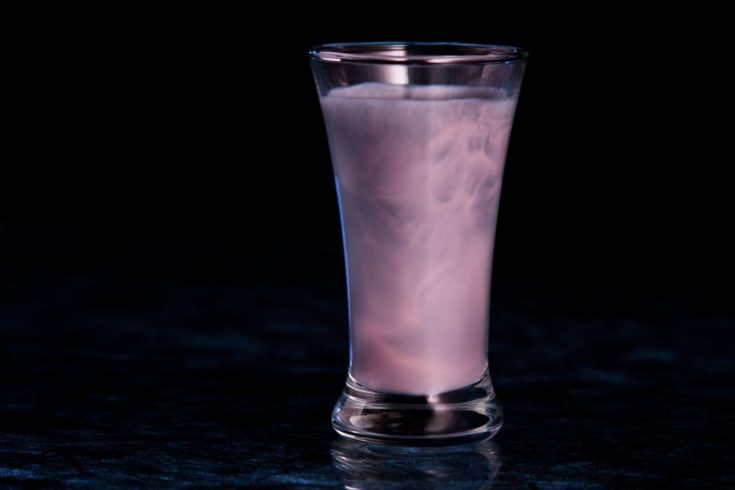 This shot is perfect for Halloween thanks to its spooky, effervescent hue. It gets its color from a combination of Tequila Rose, which is a mixture of strawberry cream liqueur and tequila, and Blavod Black Vodka.

If you can't find Blavod Black Vodka though, you can also just add some black food coloring to plain vodka for a similar visual effect.

Speaking of Halloween, these candy corn shots are so festive and sound super tasty!

The recipe involves making candy corn infused vodka by putting candy corn and vodka inside a mason jar and letting it sit for 3 days.

After the long wait, you have a sweet, candy corn flavored vodka shot! Put the shot in test tubes for extra spookiness.

Traditionally a PickleBack shot is made with whiskey, but it's just as tasty with vodka.

You probably already guessed, but this shot is made with pickle juice and vodka. Since vodka is more neutral in taste than whiskey, it actually lets the pickle flavor shine through even more. So if you love PickleBacks, try it with vodka next time and see what you think!

This shot is a delicious, tiny birthday cake in a glass!

Though the garnish makes this shot closer to 5 ingredients, it's ultimately optional and the only liquid ingredients for the shot are Cake Vodka and RumChata.

If you haven't had RumChata before, prepare for your mind to be blown. It's a rum cream liqueur with cinnamon and vanilla flavors that's beyond delicious.

If you already know and love RumChata, here are 20 other RumChata drink recipes that you should absolutely give a try. 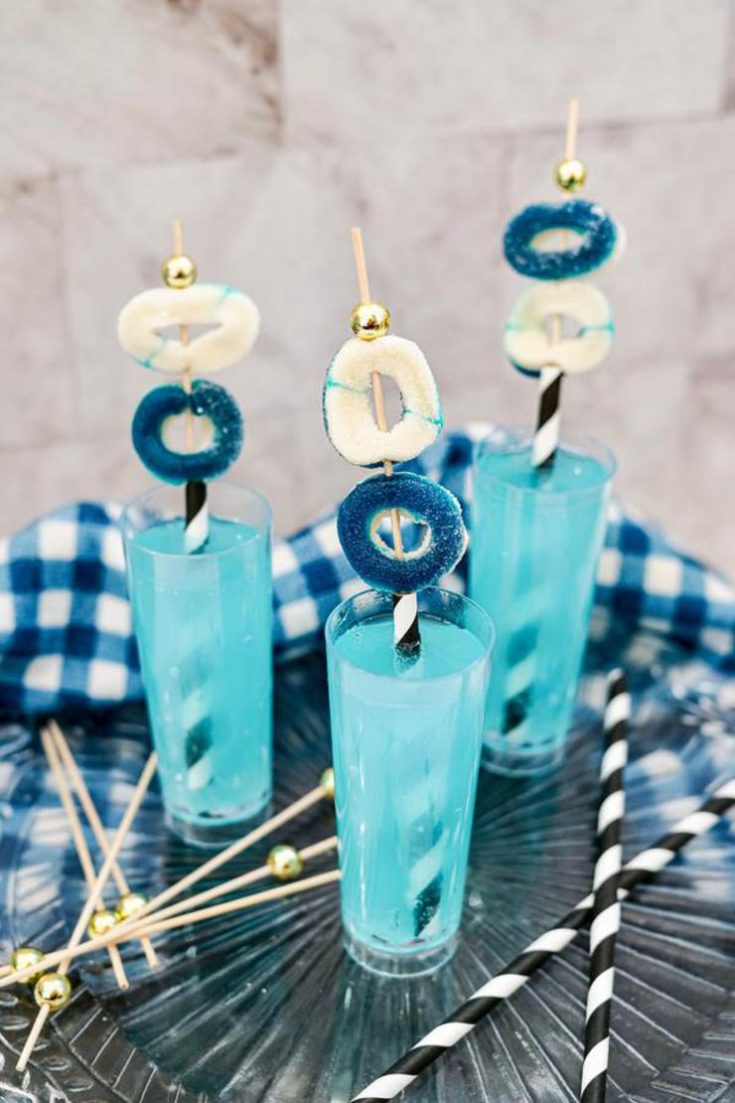 This is a perfect shooter for a summertime backyard BBQ or adult pool party!

Ingredients are Berry Lemonade and Blue Raspberry Vodka. So it basically tastes like a boozy blue raspberry Jolly Rancher. 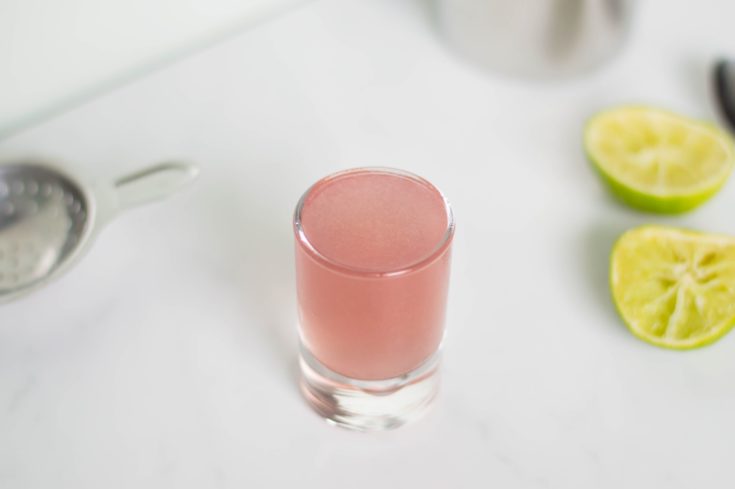 This shot is perhaps better known as a Purple Hooter or Purple Kamikaze.

Whatever you call it, it's made with black raspberry liqueur (like Chambord), plain vodka, and a squeeze of lime. It's purple, tart, and super tasty! 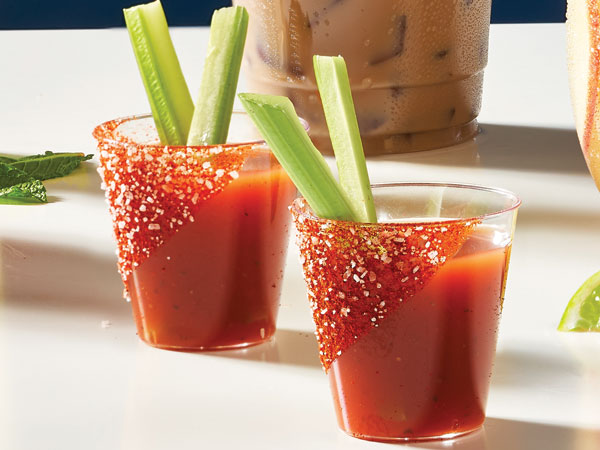 That's right: your favorite brunch cocktail is just as delicious in shooter form!

Aside from seasoning and whatever garnishes you have lying around, all you need is Zing Zang Bloody Mary mix and Absolut Peppar Vodka. If you can't find Absolut though, any pepper flavored vodka would do the trick. 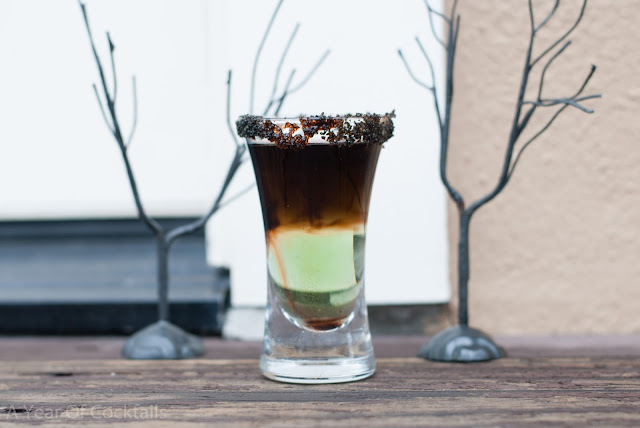 This shot uses sour apple pucker and black vodka. The result is a shot that's super apple-y and booze-forward.

It would be great for the spooky season, but you can also make it with plain vodka since it tastes the same as black vodka. Then it's just a deliciously tart apple shot that's appropriate for any time of year! 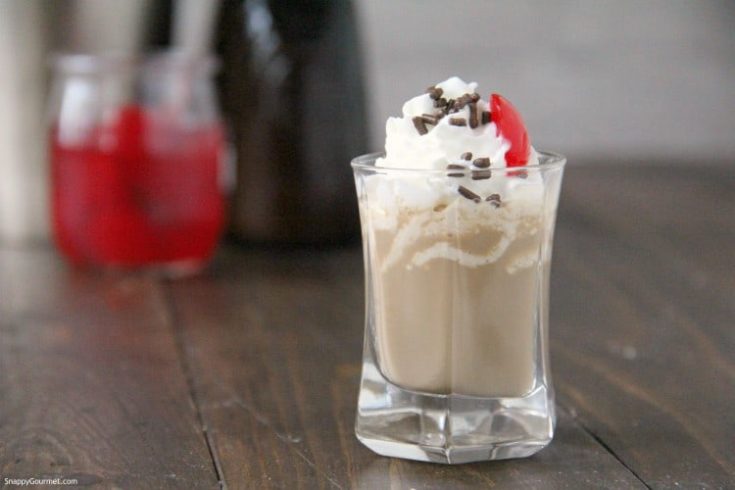 This decadent dessert shot would take any birthday party to the next level.

The two ingredients you'll need for this tasty treat are chocolate liqueur (like Godiva Original) and Cake Vodka. Spray some whipped cream on top and you have yourself a drinkable cake! 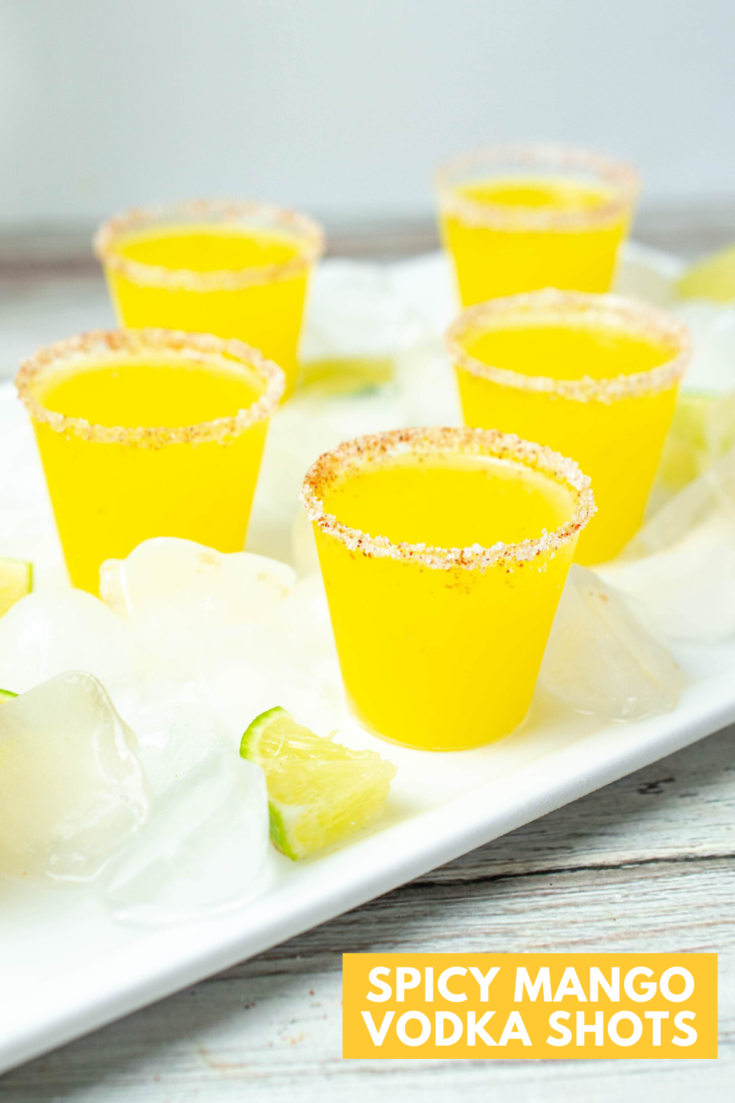 This delicious shot involves making a purée out of fresh mango and then mixing it with plain vodka and a squirt of lime. So in a way, it's actually pretty healthy and will give you at least half of your daily dose of vitamin C!

Aside from mango and vodka, the spicy part comes from putting chili powder around the rim. It's zesty, fruity, and would be a hit at any party.

Which of these shots are you excited to try at your next party? I’m partial to Lemon Drops, but they all look like a good time 🙂

Also, if you have a favorite 2-ingredient vodka shot that you think should’ve made the list, please let me know in the comment section below! 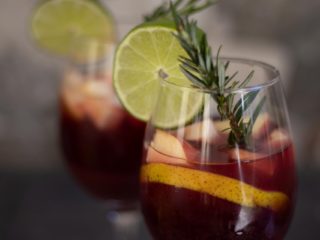 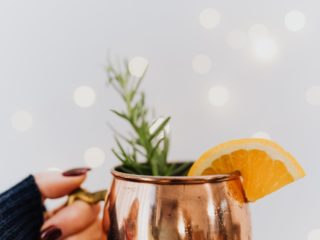 How Many Calories Are In A Vodka Soda Water Drink - BlackTailNYC.com

[…] has a lower calorie count than regular vodka by 25%. If you prefer a less fattening drink, try a plain vodka shot or vodka over […]

[…] 25% fewer calories than regular vodka. You can also reduce the calories in your drink by drinking a plain vodka shot or vodka over […]